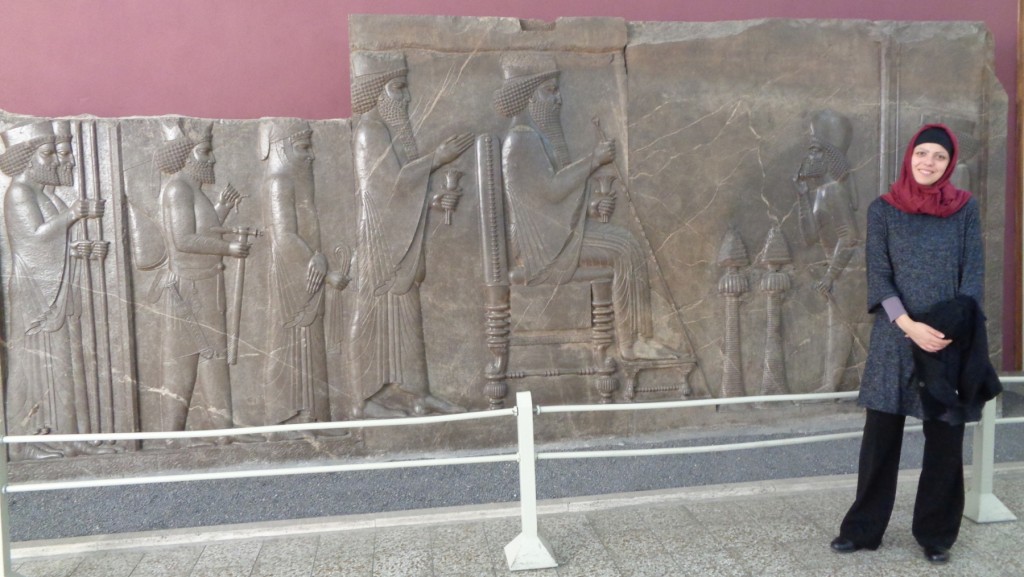 Book award winner Silvia Balatti in front of a relief from Persepolis in the National Museum of Iran. Photo: private

Ancient historian Silvia Balatti was honoured with the 25th Iran World Award for the Book of the Year for her volume “Mountain Peoples in the Ancient Near East: The Case of the Zagros in the First Millennium BCE”. Balatti successfully completed her doctorate, of which the book is a revised version, at the Graduate School Human Development in Landscapes (GSHDL), Kiel University. During the ceremony that took place in Tehran’s Vahdat Hall on February 7, Iranian President Hassan Rouhani and Culture Minister Seyyed Abbas Salehi handed over the award to the ten winners for their publications in the field of Islamic and Iranian Studies. Balatti said: “I feel very honoured to have been selected to receive this important award. I hope it will encourage more Iranian students, including females, to scientifically investigate their own past”.

In her PhD thesis, Italian researcher Silvia Balatti investigated the socio-political organization, the way of living, and the relationship to the surrounding environment of the people who lived in the Zagros Mountains during the 1st Millennium BCE. “The theme of my PhD thesis was particularly fascinating because it gave me the opportunity to deal with very different languages, sources and scientific methods in the field of Ancient Studies”, she stated. In addition to Ancient Near Eastern texts and writings of Greek and Roman authors, the results of pollen analyses also flowed into her dissertation research in order to reconstruct the former regional environmental conditions. During her visit to Tehran, she arranged a collaboration project on the Manneans (Iron Age, Western Iran) with the National Museum of Iran.

Silvia Balatti studied Ancient History and Ancient Near Eastern Studies at Pavia University, Italy between 2003 and 2009. Supervised by Prof. Dr. Josef Wiesehöfer, she earned her PhD in November 2014 at Kiel University. In 2015, her PhD thesis was honoured with the Johanna Mestorf Award, which was established by the Johanna Mestorf Academy (JMA) and the Graduate School Human Development in Landscapes in 2013.

The Iranian Ministry of Culture and Islamic Guidance established the annual Iran World Award for the Book of the Year in 1993, aiming at selecting and introducing worthwhile international books to honour their authors, editors, and translators for elevating general knowledge and cultural awareness as well as developing public scholarship/ readership concerning Islamic and Iranian written heritage.